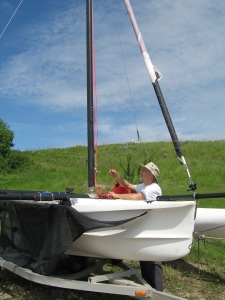 The weather had forecast some rain in the afternoon yesterday.  We headed out to Elbow early in the morning anyways.  We had waited so long for the first sail of the year.  It was time to get out of Dodge, away from the traffic,  noise and speed of life.

You can only speed on a sailboat if there is a wind, but that is only after you have the boat assembled and on the water.  That is no small feat – for the novice and on the first sail of the year.

Two hours later, we were finally in the water.  By then the clouds had rolled in.  What to do?  We headed off in the direction of least clouds.  It was rather a pleasant sail.   The rain was gentle and we had our rain gear on.  We dove into our sandwiches for we were starving by then.  Sheba looked on eagerly mouth watering, from her place on the trampoline.  She got a bite of my sandwich when I wasn’t looking.  I appeased her with her favourite rawhide chew.  Satisfied, she settled down and looked off to towards the horizon.

The rain continued.  We saw the clouds lifting in the distance and hoped that clear skies would reach us soon.  In the meantime I was enjoying the ambiance of skimming across the waters.  I did wished mightily that we had hot chocolate though.  It would have been perfect then. 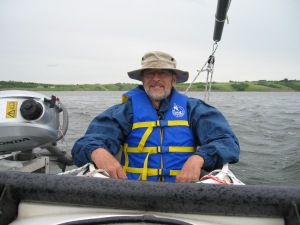 We got a little wet and after awhile a little cold.  The captain decided we better head back for shore to warm up.  The winds had died and we motored the last stretch -to the dock where the mosquitoes greeted us with glee.

And wouldn’t you know it, the sun came out in blazing in all its glory by the time we had a beer.  I sat in the truck, out of mosquito range and finished reading Anne Lamott’s Rosie.  By then I was feeling no pain, drowsy with sun and beer.  I cared not what the men and Sheba did. I was mellow.

It takes an hour to pack up the boat to head home.  Nothing is instant about sailing.  What went up, must come down.  Knots tied has to be untied.  It was a process, much like living.  A click and an ENTER work only in cyberspace but not on earth.   I know that but sometimes I forget as I tap and tap, click and press ENTER.  Sailing brings me back to earth. 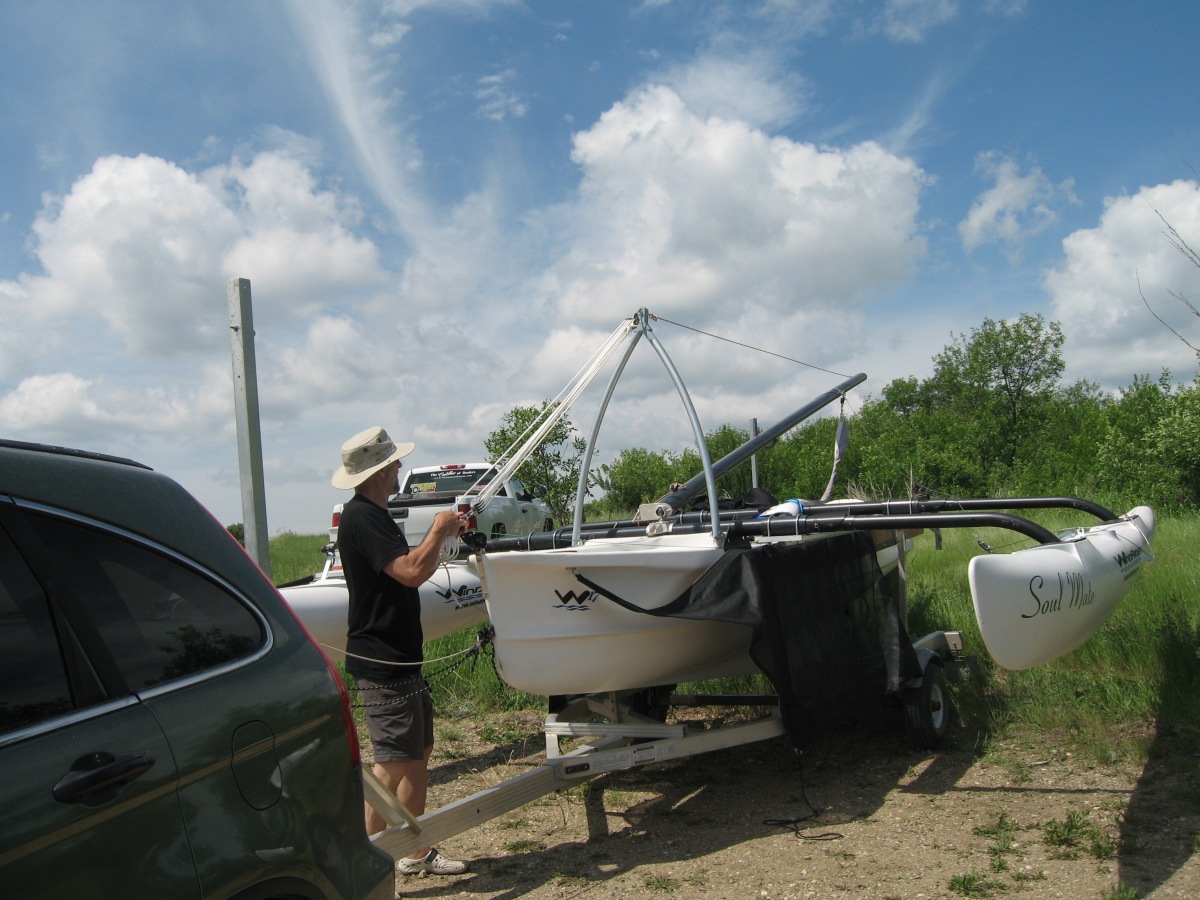 The sweat is running down my face.  I’m sitting on deck stairs, catching the gentle afternoon breeze.  I can hear Sheba panting on the deck.  I lean against the side railing, closing my eyes.  I can hear the whoosh of the traffic, the drone of  a lawn mower.

The bread is done.  The loaves are cooling on the rack.  Sheba’s life jacket and her mats are washed in soap and water, rinsed and drying in the sun.  Amazing how much her things can stink up the car.  Amazing what a little soap and water can do.

We went out to Elbow Sunday for our first sail of the year.  The mast went up and we got the boat in the water.  But that was as far as we got.  For one reason or another, the sail wouldn’t go up.  So we gave up on thoughts of sailing that day.  We ate our lunch on the beach.  Sheba sat in the wet sand, dressed in her life jacket and nowhere to sail.

After lunch we got help and took the mast down, loaded the boat and got it out of the water.  After an hour or so of packing and loading up, we headed home.  And after another hour or so we got home.  You might say we had a day of nothing or just frustrations.  But I just said:  That’s life.

I’m sitting in the kitchen now, tap, tapping away, keeping my heebe jeebies at bay.  Sweat is dripping down the sides of my face.  I wonder if other people get them.  I suppose everyone has their own demons or else they are lying.

The AC is now on.  Its coolness is soothing.  The sweat recedes along with the ghosts.  I sigh one big sigh, feeling stronger, dreaming sweet dreams of sailing.

I wished for rain yesterday and it did during the night.  But I couldn’t have wished for a better summer.  We sailed, camped, cycled, gardened, baked, watched sunsets…We worked and we played.