Yesterday, I talked about how difficult if not impossible it is to mend old fences. Today I’m thinking about how to build new ones. I have to understand first why my fences failed. I don’t want to repeat the same mistakes. They do a post mortem of failed Code Blues to find the cause. I should do the same for my failed fences.

I have been living here in peace with my neighbours for many years. The house on one side used to be a rental. There were a variety over the years. There were attractive girls who liked to sunbathe in skimpy bikinis. I remember seeing the kids from the daycare next door peeking over the fence. They were cute and quiet. There was no angry commotion. Then there was a family with 2 cute puppies. They liked to wiggle under the fence into my yard. The only thing was they always left presents behind. I had a talk with their owners. They were very pleasant and apologetic and the puppies went back to their farm.

Then there was an end to the renters. The owner of the house moved in. He had been living in a small town with his wife. She had passed away. Peter was in his 80’s and had 2 white poodles. They were barkers like Sheba. I didn’t have a dog back then. They would bark and bark at the sight of me. It didn’t matter if I tried to be friends with them. I didn’t mind them as I knew they were Peter’s companions. We got along. We greeted each other. Peter helped shovel part of my snow in winter.

I had peace with the neighbours over the same time period on the other side of me. They sprayed my trees one summer when the worms were really bad. When I told one that I couldn’t open my basement window because of the snow from his driveway was piled against it, he apologized, explaining his father comes over and does the shovelling for him. There was no animosity or paid backs for my complaints. 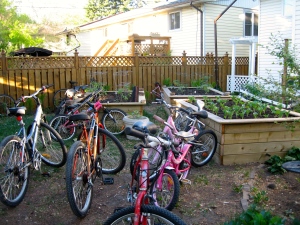 It’s strange how things changed at about the same time on both sides. They changed with different sets of neighbours. It really isn’t the fences that is the problem. It’s the people who lives behind them. I’m sad to say that we’ve discovered that the ‘fence’ that I erected to cover a small open space in the yard was tampered with. Part of it was bent over so that it was possible for Sheba to escape easily onto our busy heavy traffic. Lucky that we’ve spotted it before that happened. I felt the maliciousness of that intent.

I’m not sure if I have a conclusion or solutions to this investigation. I have not done well at all in the past. I let myself be bullied. I always acquiesced, not wanting to cause trouble. Pershaps that’s my problem. When there’s a fence involved, there’s always 2 sides. No one side decides. Everything needs to be put on the table to be clearly examined, discussed, negotiated and agreed upon. It is easier said than done, especially when one voice is louder than the other. It always command more force. It sounds more right. I’ve never been strong in my stance. I mostly back down, give up and say I don’t care. I’ve never demanded for anything. If I had, I never got. I need more work to make recommendations.

This site uses Akismet to reduce spam. Learn how your comment data is processed.